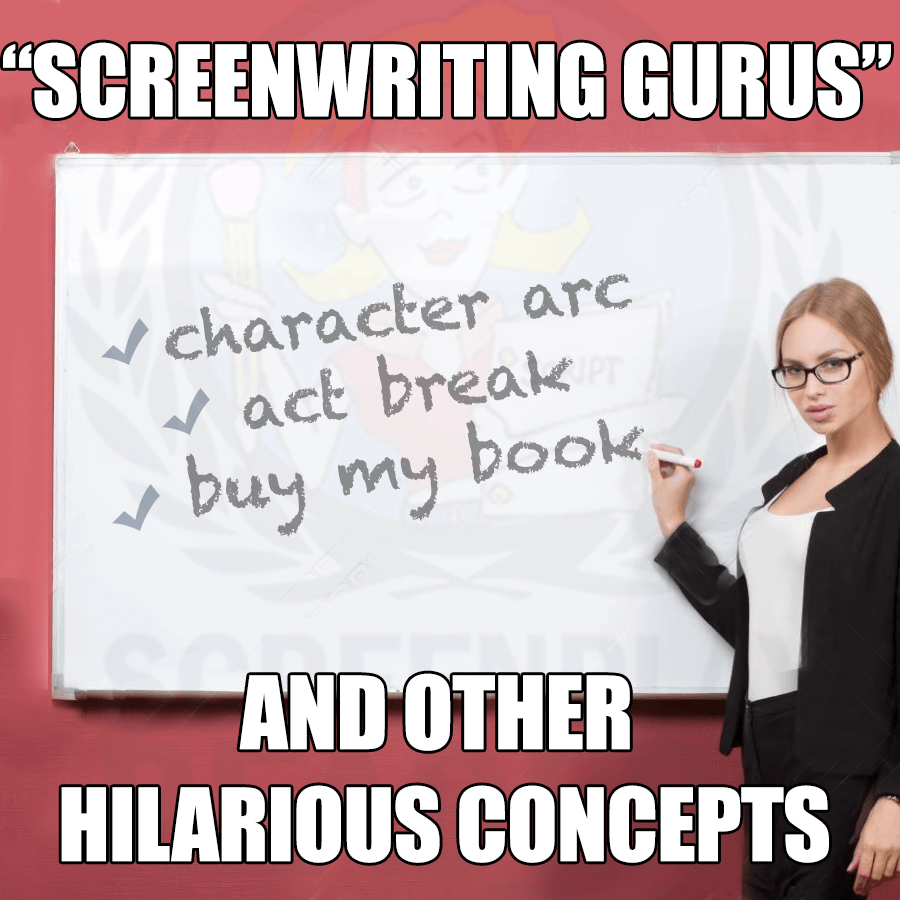 “Screenwriting gurus.” Ick. If those two words don’t make you nauseous, you’re either not a screenwriter, or you’ve sniffed too much glue.

Over the two decades of running my script coverage service, I’ve seen a lot of self-appointed screenwriting experts come and go, and it hasn’t always been pretty.

At Screenplay Readers, we’re just script readers. We read scripts and give notes. We don’t claim to be script gurus or “script doctors.”  (Which, by the way, is a term nobody in the film industry actually uses, as John August and Craig Mazin would both confirm).

But what sucks is that sometimes we get lumped in with those other clowns calling themselves script doctors and script gurus, so I thought I’d take a minute to do a little disambiguation between what we do and what self-appointed “script gurus” do. Or don’t do.

What is a screenwriting guru?

Screenwriting gurus, put simply, are any of those people you see hanging out on the internet who run a blog or website which regurgitates the work of Syd Field, Blake Snyder, or Robert McKee, or other legitimate screenwriting educators, tweaking it a little and passing it off as their own work in the form of a how-to book. Typically, they’re trying to steer you towards buying their own e-book, or towards some fluffy e-course, or “access” to their Hollywood contacts, or some high-dollar seminar or other ridiculous thing no aspiring screenwriter actually needs.

So does that mean everybody on the internet selling screenwriting services is bad?  No.

But when it comes to most screenwriting gurus and self-appointed “experts” who are marketing to you, my best advice is to WATCH THE HECK OUT, at least until you’re able to do a bit of research on whoever you’re thinking of sending money to. The best thing to do, if you’re a newbie screenwriter who finds herself somewhat enticed by the siren song of the screenwriting guru, is assume — at least until you’ve done a decent amount of research on them — that all screenwriting gurus know nothing. That is, assume they know little more than you, and that they probably can’t really help your script or your writing career any more than can information found freely online on screenwriting blogs like NYFA or No Film School, or online courses from actually reputable educational institutions.

How can I tell if I’m dealing with a script guru?

Here’s how can immediately tell you’re dealing with a screenwriting guru so you can run for the hills as soon as you land on their website:

1) You visit their blog, usually by clicking on something interesting you’re reading on social media.

2) Once on their blog, it becomes very clear to you very quickly that they’re selling a book, or a course, because an ad or email signup box pops up in your face, enticing you with some amazing-sounding freebie they’re offering in exchange for your email address.

If it’s not 100% clear by then that you’re dealing with a script guru, not to worry, as some script gurus are really clever, and it takes a few more days. Usually, those cases make themselves apparent by step 3:

3) If you do end up filling in your email address, they’ll send you an email, then you’ll download the freebie. Fair enough. But then you’ll notice that the script guru is sending you email twice, three times a week, or even more regularly, usually offering you a bunch of different products to buy.

Those emails, which are almost always automatically scheduled and mailed to you by some sort of automation technology, keep showing up in your mailbox until you “convert.”  “Conversion” is a term that means the “prospective customer” has “converted” to an actual customer. Which is, for example, you buying the $500 or $1000 product or service the screenwriting marketer is selling, which is usually a seminar or a class or a private coaching series.

Can a screenwriting guru get your script sold for you?

It’s true. Some “script experts” have been caught co-opting the work of others. For example, one such screenwriting blogger (and author of a popular book on how to pitch) populated her website with the screenplays of major motion pictures, hoping to build traffic to her script guru website by giving away the PDFs of major Hollywood films.

That is, she was monetizing screenplays not written by her, but by other writers, by luring visitors to her website with those popular film scripts and then funneling those visitors towards purchasing her own book and video courses.

Craig Mazin, of the Script Notes podcast, actually chimed in on this on Reddit, and the self-appointed screenwriting guru in question quickly and quietly pulled down the script files, ostensibly in order to avoid further recrimination.

Before working with a script marketer or consultant, first ask yourself if it’s absolutely necessary. Many screenwriters find a lot of help for free by joining writers groups or getting feedback from other writers online.

If you still want to hire a script expert, that’s fine. But at least do a little homework.  If you notice any of these qualities or factors on their website, or via your other research, walk away:

Script gurus are all bad, but it’s important to note that not everybody who helps people learn screenwriting, or helps people improve their screenplay should be lumped into the “script guru” category.

If you’re thinking of working with a script expert or buying a book from someone who claims to be an expert on pitching or screenwriting, and that person is not on this list, assume they’re sketchy — it  might not be nice, and it might be tarring a wide swath of innocent script experts with too wide of a brush, but it’s the safest way for new writers to navigate through such shark-infested waters.

In closing, despite my warnings above, keep in mind that not everybody offering their screenwriting expertise online is out to get you. It’s just that many of them really don’t know what they’re doing. I hope this article at least helps you more easily distinguish between the good ones and the frauds.

Stay frosty and keep on writing! The best thing about the wonderful trade of screenwriting is that you can learn to do it with or without an expert. But pick the wrong “expert,” and you could end up wasting a lot of time and a lot of money.

Screenwriting Gurus — Why Most of Them Suck and How to Avoid was last modified: January 1st, 2020 by B. O'Malley