Script coverage for Boogie Nights, which I recently found on the interwebs, thanks to a sleuthy Redditor, teaches us screenwriters and script readers some key lessons that we need to keep in mind when considering script coverage for own screenplays:

Every reader has their own weird opinions on what makes a RECOMMENDED movie and what doesn’t. I happen to be a huge fan of Boogie Nights, despite it being a bit derivative. I’m an even bigger fan of PT Anderson, who I believe matured into arguably my generation’s greatest filmmaker.

Lesson 2: “Vision” Is Hard to Visualize

It’s often extremely difficult for a script reader’s “vision” of the script to match that of the filmmaker.  There’s little doubt in my mind that the reader who read Anderson’s draft in 1994 had any concept of how kinetic, fun, and engaging the final product of Boogie Nights could actually be.

Check out the final paragraph below, which begins with “Later that night.”  The beats that the reader describes are beats that are definitely in the film, but which are somewhat minor. After all, the story of Boogie Nights was primarily about Eddie. From what this reader wrote, you’d think the film’s narrative doesn’t really center on Eddie.

Of course, that could be explained by the possibility that the script this reader read was a vastly different draft than what was turned into the film.  Or, of course, that PT Anderson changed a lot between this draft and the final film.

The lesson behind this lesson is: it’s our jobs as screenwriters to make it difficult for a reader to not focus on what we want her to focus on.  To not give the reader any doubt as to who’s the main character, what story they’re following, and most importantly, what they should feel.

Here’s the original 1994 coverage below. It might be missing some components, or this might be the whole thing. I haven’t been able to confirm yet. Let me know what you think.

SYNOPSIS: In 1977, JACK HORNER, 50’s, a prominent porn film director, and his coterie of ACTORS and TECHNICIANS like to hang out at the Hot Traxx disco in Van Nuys.  The club is owned by MAURICE, 30’s, a Puerto Rican who is constantly begging Jack to put him in a movie.  Jack lives in a mansion in the hills with the woman who stars in most of his films, AMBER WAVES, 30’s.  Among Jack’s other stars are REED, 20’s, a weightlifter; BUCK, 20’s, a black hi fi salesman who dresses as a cowboy; ROLLERGIRL, 17, a high school dropout who is always on rollerskates; and BECKY, 20’s, an attractive black woman.  At Hot Traxx, Jack notices a handsome young busboy, EDDIE, 17.  When he approaches Eddie about starring in a film, he impressed that Eddie can usually get it up several times in an evening.

Later that night, when everyone returns to their homes, Amber tries phoning her young SON, but her EX-HUSBAND won’t put him on the phone.  LITTLE BILL, 30’s, who is Jack’s assistant, is upset to find his WIFE having sex with another MAN, but apparently this is a common state of affairs, and she tells Bill to get lost.  Becky is hounded by an ex-boyfriend, RONNIE, 20’s, who pounds on her door and won’t accept the fact that she has dumped him. 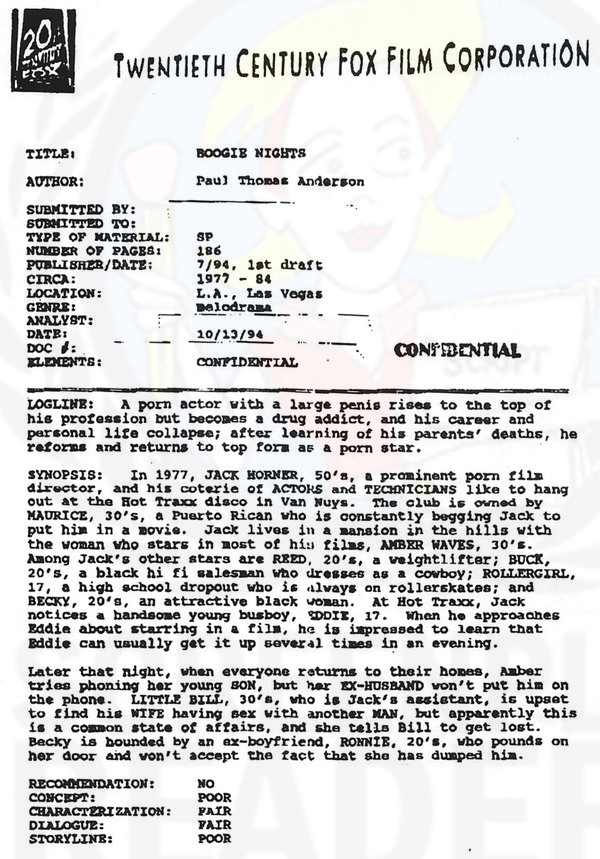 One Comment on “Read the script coverage for Boogie Nights”