Documentaries have one key, primary ingredient that makes them documentaries: they reveal reality.

But then again, so does a security camera, propped up over a cash register in any given liquor store.

So what is it that differentiates a documentary film from a security camera feed? Or the video babycam for that matter? Or a news report? Or a vlog entry?

The difference is screenwriting.

If you’ve ever watched a good documentary, you’ve felt it: the narrative pull; the emotional investment you find yourself a part of; the concern, the craftsmanship, the wonder at how much time and effort went into documenting whatever fantastic, yet utterly REAL, story is unfolding.

And nearly all of that is because the filmmaker telling the story, is actually a storyteller making a film.

Good film documentaries, invariably, seek to reveal. Focusing on what may seem at first to be a singular topic, person, event, or subject, they branch out, expanding the viewer’s knowledge and/or depth and breadth of understanding. But that process, taking the viewer from what may be a singular orientation at the outset, to a wider or deeper understanding, is usually the result of not only what the documentarian captures, but what she chooses to show and in what order.

That is, the edit.

And the editing of a documentary, from raw footage, however weak or powerful, into a piece of work that takes the viewer on a coherent, narrative ride, requires the rudiments of screenwriting, if not a small lifetime of screenwriting wisdom.

Documentaries like The Queen of Versailles (2012) — the story of a rich real estate mogul and his overspending trophy wife as they weather the Great Recession — at first blush appear to write themselves. After all, when you’ve got an out-of-touch, multi-millionaire housewife that loves to spend money, five or six snotty kids who let their animals shit and die on their watch, and a timeshare mogul pulling out his hair because the cheap mortgages he’s oversold to Las Vegas tourists are now coming back to bite him on the rump, you might think that simply strapping a GoPro to everybody’s head and checking back in a year might give you enough footage for a rip-roaring reality spectacle. 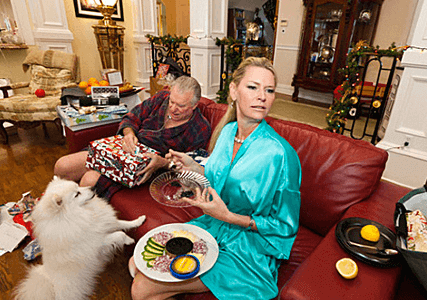 And you might be right. But it turns out it was pretty clear that even this fly-on-the-wall documentary had to make some narrative choices. One segment in particular highlighted the story of one of the family’s domestics, who emigrated to America decades previous, and who hadn’t seen her own child since. She lived in the meager 12×12 space of what was once the playhouse of the family’s children, in the backyard, and seemed thankful to have the privilege.

A similar segment had the rich wife visiting an old high school girlfriend, now sick and near foreclosure in her tiny house somewhere in upstate New York.

A documentarian following the family might’ve shot 10, 20 such segments, or she might’ve shot zero. But that the documentarian chose to include at least 2 proves that they, at the very least, didn’t want to shy from the contrast between the uber-rich wife and the uber-poor people in her life.

But what is narrative without contrast? If the documentary was 100% about how rich the family is, and how out of touch they are, we might, in a strange way, forget about all that as the story unfolds. That the filmmaker chose to display contrast — chose to include those scenes in the final cut — displays a narrative choice.

The Netflix documentary What Happened Miss Simone? (2015) follows activist/singer/piano virtuoso Nina Simone from her humble beginnings in the Jim Crow south to her heady days of superstardom, then through her participation in the Civil Rights movement, and ultimately to her self-imposed exile and physical and mental decline as her health failed her.

The filmmakers begin with a long, almost strange on-stage intro of Ms. Simone late in her career. For viewers who have no idea who this woman was, Ms. Simone’s actions seem strange:  staring at the audience for long moments, admonishing noisy or standing audience members, lashing here and there in often inscrutable diatribes. The filmmakers’ goal was perhaps to leave the viewer in a state of simultaneous utter fascination and significant discomfort. Or perhaps to state boldly:  “This is Nina Simone. An artist, unmitigated and unapologetic. A powerful, beautiful human being with overwhelming talent. We’re going to show her to you at a moment when she might not have been at her best, but it was the moment that best captures the essence of her fitful genius and message.”  There’s authorial intent behind the narrative choice. And we viewers can’t help but engender an immediate emotional attraction and an intellectual curiosity, while also a distancing, penetrating feeling that all will not be right for the duration of the film we’re about to see.  How better to kick off a motion picture about such an artist? 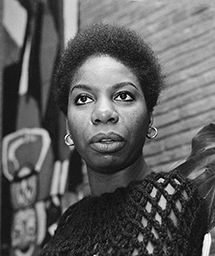 While a human life is perhaps an easy “track” to follow for a narrative filmmaker — one starts at the beginning and ends at the end — this film choose to weave in and out of the timeline, showing us what they feel is the most important first, then the next most important, then the next. The actual literal timeline of Simone’s life served this film only in a perfunctory manner. Some of the narrative thrust was hung on it, but the message, the core of Nina Simone, was clearly far more important than the overarching timeline, something lesser filmmakers cling to far too commonly in biographic documentaries like this. (One in particular comes to mind, though not a documentary: The cludgy, dumbed-down David Attenborough biopic about another artistic genius, Chaplin (1992))

Here is a woman with a long dossier of life and experiences, nearly all of them as momentous and jaw-dropping as her husky, soulful voice and genius, and the filmmakers know it. Yet their harnessing of the material — their filming, their interviewing, their research — was clearly secondary to the delicate attention they paid to the edit. To the narrative. And with great effect. The film ends as it begins, on that same stage — a narrative (read: writing) choice — but leaves us with a new feeling:  The feeling that, while we may know a little more about Ms. Simone, we will never know everything. (Inviting us, perhaps, to become closer to the material on our own, in our own time, in our own fashion.)

Writing a documentary when the filmmakers become part of the narrative

The HBO series Foo Fighters: Sonic Highways (2014) visits a new “rock and roll town” every episode (Austin, DC, Los Angeles, etc.), and singer Dave Grohl seeks out each town’s musical roots: its legends, its recording studios, its clubs, its record stores. It’s a fine example of a documentarian knowing what he’s after and going and getting it.

But that’s beccause the band and the film and sound crew that follows them have only a single week in each town. So Grohl has a brief, prepared hitlist of places and people he’d like to talk to and visit.  And while the visits take place with a bit of “Wow” and Grohl-humbling bows and the like, the discoveries and attendant minutia that seems to tickle Grohl only rarely ever jumps out at the audience in a way that connects emotionally and dependably.

At the end of each week / episode, Grohl and the Foo’s play and record a brand new song, inspired that week by that particular city, and they shoot a music video for it. Pretty damn impressive, even if I’m not a huge fan of the actual songs they’ve pulled off on the show. (They’re too rushed, too forced. Although I’m a huge fan of the Foo’s in general.)

Despite the drawbacks, Grohl and the band weave their way into the fabric of the story well enough, but then completely dominate it in the last few minutes of the show, leaving each episode’s musical discoveries feel squelched; stepped on like a road-worn fuzz pedal.

The Jinx (2015), another HBO documentary series, follows accused multiple murderer Robert Durst through his “is-he-innocent-is-he-guilty” tale, from the murder of his wife in the 70’s through more recent murders he’s blamed for.

It’s clear that the filmmakers started off on the series to find answers, but towards the end of the series, the filmmakers become part of the story itself, and they grapple over whether or not they should be involved and to what extent. The choice they make ultimately ends up answering the very question they sought to answer at the outset. 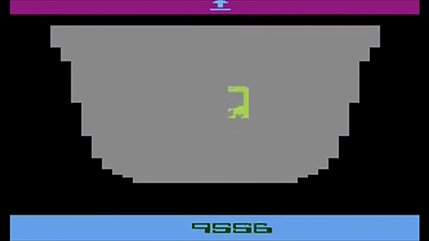 Atari: Game Over (2014) is all about the filmmaker from the get-go. He wanted to know what happened to all the “E.T.” Atari cartridges when Atari decided that their biggest videogame flop was to be pulled from shelves. The search begins with an urban legend that has Atari mysteriously burying thousands of E.T. Atari cartridges in a desert landfill in the early 1980’s and ends with a massive archaeological effort.

In all three of these documentaries, the documentarian becomes a major part of the story, some would say either intentionally or unintentionally. I would argue that in the edit room — where the narrative for any film is being written for what’s probably the final time — there is no such thing as “unintentionally.”

These filmmakers — Dave Grohl excepted, as his show’s concept is rooted in his involvement — all let themselves become part of the story. Whether that’s a good thing or a bad thing, of course, depends on the story being told and the preference of the audience. But the choice to become involved is a narrative choice.

Move the audience with truth. The “how” no longer matters.

To apply our screenwriting to the documentary process is to be keenly aware of the universal human hunger for storytelling. It’s in our DNA. It’s how the sum total of our traditions and history and knowledge was passed down from generation to generation long before the written word ever existed.

The visual and audio palette from which we can paint narrative has never been more accessible and bursting with potential. To limit our narrative abilities solely to the written word — the typed phrase, the turn of a page — becomes more of a hindrance and a shame with each new color added to that ever-expanding palette of storytelling in the digital age.  Non-linearity may overwhelm us with choices or even frighten us as artists, but the age has spoken: story is no longer slave to the prepared, written word.

As screenwriters, we can master this new lingua franca or be rendered irrelevant by it.

The craft of story is no longer bound to the tools. We shouldn’t be either.