What do I love? Its ubiquity: Everybody uses it. (And if you’re running a script coverage service like me, you need to be able to open whatever file the client sends in. And 95% of the time, that’s either a PDF or, you guessed it, a Final Draft file.)

What do I hate?  Well, “hate” is a strong word. I reserve that for folks like the Westboro Baptist Church,  Monsanto, and shows like The Bachelor.

But what do I strongly dislike about Final Draft?

Dislike 1) Its penchant for crashing in the most inopportune moments, no matter what version I have, and no matter whether I run it on my PC or my Mac.  (Of course, maybe this is just me.  i.e. someone who’s worked in IT, designed networks, and built and repaired pc’s and macs for 30 years, AKA  “a total computer dummy.”)

Dislike 2) The interface/user experience.  It feels so, well, 1994.  The game has changed when it comes to simplicity and elegance. That “1990’s desktop” feeling permeates Final Draft, and its cousin, Movie Magic Screenwriter.

To strain a metaphor, it feels like I’m driving a 1994 Ford Taurus in the age of the Smart Car and the Mini-Cooper.

Dislike 3) The price.  $250 is a big chunk of change for most screenwriters.  But I don’t blame Final Draft – they’ve created and marketed a great product that basically came to dominate the screenwriting space.

And that wasn’t just through great marketing. There are tons of great things about Final Draft, and most folks wouldn’t dream of trading their Final Draft for another screenwriting app.

But remember 1992?  That was the year Microsoft released their first Microsoft Office package.  It had Word, Excel, Powerpoint, and a precursor to Outlook called Mail.  All for the low, low price of $799.  Ahem.  $799.

Yet there’s something to be said about keeping your flagship product at a premium price. If Final Draft were to suddenly cut their price from $250 to $79, granted, a lot of old school screenwriters and industry professionals who use it might – might – take pause, and question whether or not their favorite venerable screenwriting software standard has dropped some of its features.

But is Final Draft really worried about that?

In my opinion, speaking as a screenwriter and a script reader, Final Draft is missing the big boat right now.

And that boat is:  everybody’s now a screenwriter.

A skiff attached to that boat is the fact that those screenwriters are moving faster and faster away from the “desktop” application, and more towards tablet-based apps and mobile apps.

Final Draft appears to have caught wind of this, and has developed their Final Draft Writer app for the iPad.

But here’s the big problem:  That one’s $49, which, granted, is a welcome break from the $250.  But how many screenwriters are taking a look at their $249 version, and then their $49 version, and then wondering how much is missing from the $49? At the time of this post, Final Draft’s website didn’t really give a clear idea of how the two versions’ features compare. (Maybe it’s there somewhere, and I need glasses.)

Point is: Final Draft can have its $249 desktop version, and its $49 iPad version, but in my opinion, based on my experience, that price point disparity can cause confusion, among both older screenwriters and younger, more mobile-oriented screenwriters.  And confused potential customers tend to abandon their shopping cart.

Now, sure, screenwriters who got their start during the heady days of the typewriter, like me and many of my generation, are probably not keen on the idea of writing a screenplay on a tablet, but for thousands of young screenwriters, writing movies on an iPad or an iPhone is not as far a leap. And that’s more and more becoming the reality of screenwriting. Faster.  And, if you can even conceive it, as I’ve, admittedly, had some trouble doing:  even more portable than a laptop.

I’m not going to be the one who rings the death knell on the idea of desktop apps in general, but I will say this: the day of the $249 desktop app will soon be over. I’m no Final Draft company insider, but if I was the CEO, I’d take a long hard look at what sense it makes to have a desktop app priced at $249 which doesn’t seem to be much different from the mobile app priced at $49.

Please note: I’m not here to rake Final Draft over the coals.  They put out a fine product, but that product is just, well…getting old. Meanwhile, the number of new screenwriters grows every day. How many of them 5 years from now are going to be gravitating towards a $249 price point?

How many of them can afford to pay their student loans, let alone finance a copy of Final Draft?

But take heart!  There are now cheaper and free alternatives that, in my opinion, really give Final Draft a run for its money.

Whereas software development used to be the realm of large, well-funded companies and teams made up of dozens, if not hundreds of developers and programmers, now it’s all about the smaller, more agile companies rushing in to fill an ever-increasing demand for lighter, cheaper apps.

And a few of those apps have finally gotten my attention.  And I’m a desktop guy who, up until recently, would vehemently poo-poo using anything other than Final Draft.

Wow!  This app is, hands down, the most elegant, easy-to-use, streamlined little firecracker of a screenwriting program I’ve ever used.  And I’ve used them all.

The interface is sleek, plain, and modern, and fully customizable.

I jumped right in and started writing a scene, and it just flew.  Right on to the page.  Very intuitive tabbing

For new screenwriters: By tabbing I mean, for example, you type INT. COFFEE SHOP – NIGHT, then hit Tab and it jumps down and awaits your input for the action/description line.  All good screenwriting programs do this, of course, but Trelby’s just feels FAST.  Faster than any I’ve used.

I know… I know. It’s a small thing to complain about. But those tiny bits of “lag” – even if they’re just mere milliseconds between your keystroke and what appears on the screen – they really add up.  Especially over the course of a 90-page screenplay, consisting of 6 months of work, and 20-30 drafts.

Trelby’s lag is virtually non-existent, even when I loaded in a test script.  Oh, and by the way, Trebly inputs Final Draft files, and saves Final Draft files, so if you’re thinking of making the switch, you can do so in a very friendly, non-destructive way.

Other great features I love about Trelby:  it exports Fountain markup.  (Fountain is the new open-source markup language that lets a lot of different new screenwriting apps share a common script formatting standard.  Think of it as a behind-the-scenes bit of code that standardizes how a screenplay is supposed to look, which is shareable and FREE for new, smaller developers to use and incorporate into any new screenwriting software they’d like to create or enhance.)

The only major drawback to Trelby that I could find was that it doesn’t have the ability to lock and color-code revision pages.  If your production is going to PINK, there’s nothing I could find in the software or on the website that enables you to do it with as much ease as you would in Final Draft or Screenwriter.

But for me, the lightweight feel of Trelby, and its ability to export to Final Draft, are the things that are gonna compel me to give Trelby a shot on my next screenplay. For me, the lag is unbearable on other software packages, so this is a real lifesaver. For others, they may not care or even notice the lag, so Trelby would be less appealing, especially without the easy color-revision pages feature.

The good news is, Trelby is open source and seems to be adding features all the time. 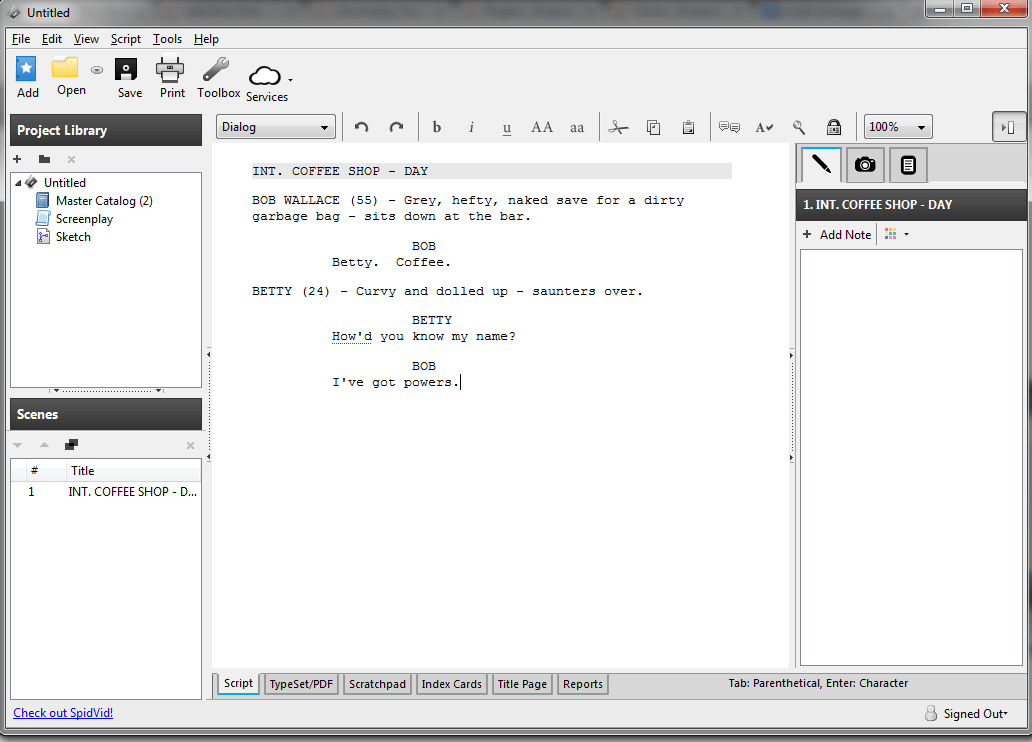 Available for PC, Mac, and Linux.

Celtx has been around for a while, and they’ve won over a lot of screenwriters with their feature-packed free screenwriting software, and their cloud-based paid version.

Both feature all the goodness you’d expect from a world-class screenwriting program, but the paid version offers a few more wells and bhistles. The most prominent of those features being clip art you’d use for scene blocking/storyboarding, etc.

The suite is responsive enough, but the major drawback for me is the sheer amount of clunk and window space it takes up. It seems everything you do opens up another window, and it fills up your screen pretty fast. Not to mention the amount of tabs, buttons, and menus can really be daunting for the uninitiated.

The suite itself is powerful and quickly becoming its own standard. But the design and usability? It definitely feels like sitting down in front of an Avid video editing program for the first time.  And I’m not sure that’s a good thing for all screenwriters.

FadeIn Pro’s features list is overwhelmingly plump.  And its design and usability puts it ahead of Final Draft in many ways.

FadeIn is impressive. It’s a great screenwriting program, and packs a wallop of elegance and usability, as well as all the features you’d expect from a screenwriting package.  Scene navigator, easy tabbing, lots of import/export options (to/from Final Draft and many others), and even page-color/revisions.

For $79, it may be worth it to just jump right in. I advise not trying the demo, as it’ll only drive you away.  The underlying program is solid and I’m sure it won’t disappoint.

The bottom line:  Final Draft is still the big gorilla. People still see it as the industry standard.  But with more and more modern, elegant, streamlined, super-responsive, and future-proof desktop and mobile screenwriting apps hitting the market, and especially with their increasing compatibility with Final Draft files, you owe it to yourself as a smart screenwriter to take a second look.

Final Draft will probably always be there in case you’re not happy. Read their response to my blog post here. But with so many new awesome screenwriting program choices, how can anyone not be happy?

3 Great Alternatives to Final Draft (that are either free or cheap) was last modified: October 4th, 2021 by Screenplay Readers